Annelies and I are Agile Coaches. We often work with teams who would like to implement Scrum or other frameworks that fit within an agile mindset. You can implement this bottom down; Management decides they would like to use Scrum as a framework. Another approach is, bottom up. One or more software development teams learned about Scrum, and they decided they want to start implementing it. Implementing Scrum, or any agile methodology for that matter is a big change for any organization. It will take years in large organizations to implement. You will encounter people who will be happy about it, and people who will decide to leave the organization.

In this article, we would like to talk about four categories of people you encounter during a change process and how they can support your change. We’ll stick to the example of implementing Scrum for the sake of this article. 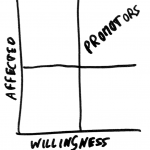 Teams who decide themselves they would like to use Scrum are willing to start using it. They also realize their process will be highly affected by implementing Scrum. Teams who are highly willing and are highly affected are true Promoters of the change. You can use the people in the team to spread the word in the organization. Ask them to attend Lean Coffee sessions or share their experiences in Communities of Practice or Guilds. Ask them to write blog posts or share their experiences via internal newsletters. We call these people the Promoters. 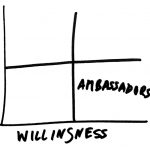 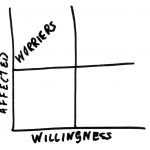 When Management decides to implement Scrum in an organization, you have a top-down implementation. There will be teams who will be happy; they were probably already thinking about using Scrum themselves. They will quickly become Promoters of the change. However, we know, as with every change, there will be teams or individuals who will be affected by the change but are not really into this agile stuff. “Scrum and Agile are chaos; nothing will be documented anymore, why does the Scrum Master make me stand up every day and why should we want to deliver software every day?”. Er, right. Those teams or people are not willing to implement Scrum. There can be many reasons for this. People are worried about this changer. These people we call the Worriers. We assume you will understand why we call them Worriers… You will need to spend a certain amount of effort on those people. However, you would like to call in the help of other people. Realize you are not alone! We talked before about Promoters and Ambassadors. Connect Promoters and Ambassadors to the Worriers, and you Worriers can disappear like snow in the sun. Too bad, it probably won’t be that easy. However, you can talk for hours with your Worriers. You can come up with facts, your experiences, it will cost you much energy and why would they believe you? They will think you are from the Scrum Borg, trying to assimilate them. If you can connect Promotors and Ambassadors to the Worries, they can do the hard work for you. They will share their stories and experiences with the Worriers. Especially, the Ambassadors have no interest in assimilating the Worriers. The Ambassadors are not affected by the change. They support your change because they believe in it, they will show passion for the change. You cannot ignore the Worriers, you need to coach them where possible and necessary, but 80% of your energy should be focused on the Promoters and Ambassadors. Keep the Promotors willing to change and keep the Ambassadors informed and involved where possible. Link the Promotors and Ambassadors to the Worriers and allow change to happen. 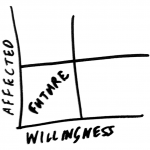 There is another group that is not willing to change, but also not affected. We call them the Future. They can grow into Worriers, or they can grow into Ambassadors and, if you are lucky, straight into Promotors (Yeah right… be lucky). However, they are currently not involved in the project They could be located in a different department or different country. It is wise to keep in contact with the Future. You never know what the Future will bring, but you would like to think about it now and then. You need to keep your options open when looking at the Future. However, you probably can’t forget about the Future because some day the Future will be here.

You need to think about where people fit in the matrix because it can make your life as a change agent easier. Find your Promotors and Ambassadors!

If you want to learn more about how to help people to move in the matrix, attend one of our Lean Change Agent workshops.